Sam the Sham and the Pharaohs 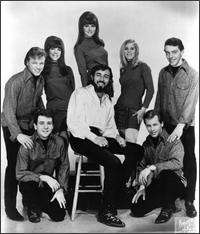 Although he had been a professional musician since 1959, David Martin is best remembered as the founding bassist for Sam the Sham & the Pharaohs. Formed in 1963 with Sam “The Sham” Samudio, the group scored a monstrous hit with “Wooly Bully,” co-written by Martin. Although America teens were firmly entrenched in the British Invasion at the time, the song raced to #2 on the pop charts and sold over 3 million copies. And even though the song never hit the #1 position, it was named the #1 single of that year based on it’s tremendous sales. No other single has ever done that. To this day, no honest music collection of the era is complete without that song. Martin left the group not long after the release of “Wooly Bully” due to a conflict with management. He soon retired from music and opened his own video and television repair shop which he ran until he passed away on August 2, 1987
LLR Books mywriterssite
Email ThisBlogThis!Share to TwitterShare to FacebookShare to Pinterest
John William Tuohy Sam the Sham and the Pharaohs
Newer Post Older Post Home