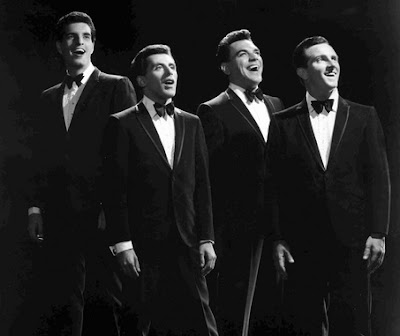 Nick Massi was an original member of the Four Seasons (performing on some of the band’s biggest hits, such as “Sherry,” “Big Girls Don’t Cry,” “Walk Like a Man,” and “Rag Doll”), supplying the bass vocal parts and helping arrange the band’s trademark vocal arrangements.

Born Nicholas Macioci in Newark, NJ, on September 19, 1935, Massi honed his singing skills with several bands during his teenage years, before hooking up with the great Frankie Valli in a local band called the Four Lovers.

By the early ’60s, the band had changed their name to the Four Seasons and by merging doo wop vocals with memorable love songs, the band enjoyed a staggering 17 hits on the Billboard Top 40, touring the world in the process.

Fed up with the hectic lifestyle by 1965, Massi left the band. The band was inducted into the Rock and Roll Hall of Fame in 1990 and 11 years later on Christmas Eve, Massi succumbed to cancer in his hometown of Newark. – Greg Prato (allmusic)
LLR Books mywriterssite
Email ThisBlogThis!Share to TwitterShare to FacebookShare to Pinterest
John William Tuohy Nick Massi
Newer Post Older Post Home