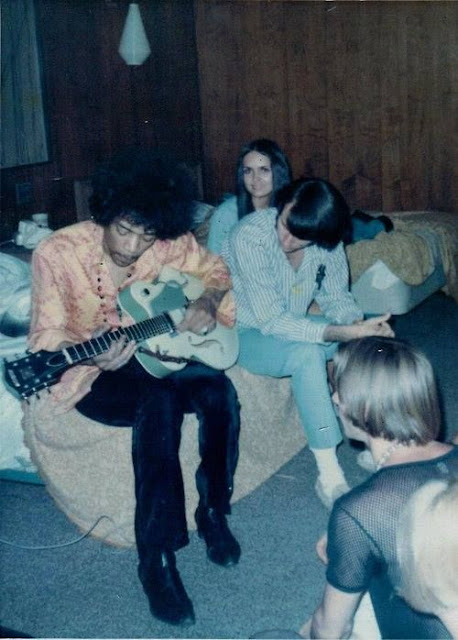 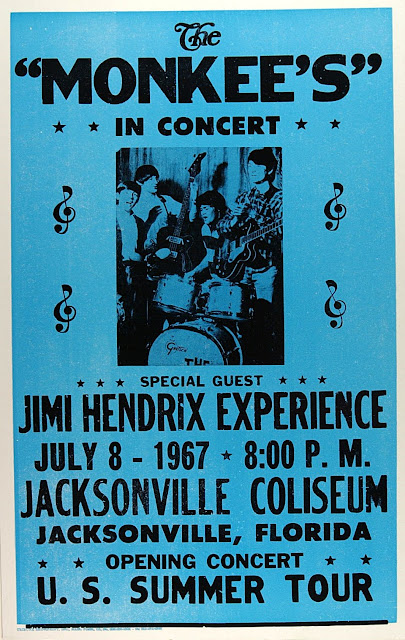 Fifty years ago, on Sept. 18, 1970, guitar legend Jimi Hendrix died of asphyxia while intoxicated. He was only 27 years old, and his stint as a superstar lasted less than five years, but he obviously made his indelible mark — being declared by the Rock & Roll Hall of Fame as “arguably the greatest instrumentalist in the history of rock music” and by Rolling Stone as the greatest guitarist of all time.

And one of the first mainstream rock acts to recognize Hendrix’s greatness was the Monkees. Unfortunately, the Monkees’ young fans weren’t quite as enthusiastic when that TV band’s Micky Dolenz came up with the seemingly bizarre idea to hire Hendrix as the opening act for the Monkees’ first U.S. tour in 1967.

Hendrix ended up playing only seven of that tour’s 29 dates, dropping out after having to contend nightly with thousands of nasty, impatient, jeering teenyboppers. “Yeah, it was kind of embarrassing,” Dolenz admits to Yahoo Entertainment. “Jimi would go, ‘Purple haze!’ and the kids would be like, ‘We want Davy!’ He’d go, ‘Foxy lady!’ and they’d yell, ‘We. Want. The. Monkees! We. Want. The. Monkees!’ He was coming up against that very typical opening-act dilemma for anyone touring with a big headliner, really.”

The odd pairing might have been doomed from the start, given the two artists’ very different audiences. But Dolenz had been a fan of Hendrix since the guitar god was still known as “Jimmy James” and performing in Greenwich Village nightclubs with the Blue Flames. “It was 1966 or so, and the Monkees were in New York on a press junket,” he recalls of the first time he saw Hendrix live. “Someone said, ‘You gotta come down to the Village and check this cat out.’ The actual act was, I think, the John Hammond Band or something. But when we went down there, I remember sitting in the front row and there was this young kid, and he was playing guitar with his teeth! I didn't even know his name at the time. I don't even know if he was introduced, but he was going under the name Jimmy James at that point. He was just great.”

About a year later, Dolenz saw Hendrix again, at the Monterey Pop Festival. Much had changed, and this time, Dolenz was even more impressed: “Between that time, Jimi had gone to England and run into a guy named Chas Chandler, who was going to be his manager. And basically what Chas Chandler did, my understanding is, was he heard Jimi and then he put Jimi together with [bassist] Noel Redding and [drummer] Mitch Mitchell. And so ironically, I guess you can say that the Jimi Hendrix Experience was a ‘manufactured group’!”

When Dolenz witnessed Hendrix’s iconic performance at the Monterey Pop Festival, he recalls, “All of a sudden this act comes on, not very well known yet, but very flamboyant — the clothes, the music. And I said, ‘Hey, that's the guy that plays guitar with his teeth!’ I recognized him. And so simultaneously, just by coincidence really, we were looking for an opening act for our first tour. So, I suggested the Jimi Hendrix Experience to our producers, because obviously it was incredible music, but also very theatrical. And the Monkees were a theatrical act, if you really examine it. I guess that's why it made sense to me. I just thought it would make a great mix.”

Apparently the admiration wasn’t mutual at first, as Hendrix had previously blasted the Monkees in the U.K. press, describing their music to Melody Maker as “dishwater” and saying, “Oh God, I hate them!” But once the Monkees’ “people went to his people,” says Dolenz, “Chas Chandler and everyone thought it was a good idea.” And so, on July 8 — less than a month after Hendrix had been the breakout star of Monterey Pop — the Jimi Hendrix Experience joined the Monkees for their first joint tour date in Jacksonville, Fla.

While the audience was vicious and unwelcoming, Dolenz was too wrapped up in watching Hendrix’s electric stage show to actually notice what was transpiring in the venue. “I didn’t even pay attention to what the audience reaction was, because I was just mesmerized by Jimi and his art,” he confesses. “We were just blown away by him every night — I know Nez [the Monkees’ Mike Nesmith] especially was. We would just stand in the wings in awe. I was fascinated by Jimi’s showmanship, by his persona. All I knew was, I liked it. And to this day, I don't care much what people thought.”

Hendrix apparently did care what people thought, as he decided to quit the Monkees’ tour just eight days later, after dates in Miami, North Carolina, and a three-night run at New York City’s Forest Hills Tennis Stadium. Later, a seemingly bitter Hendrix told British music paper the NME that he’d been replaced by “Mickey Mouse.” Dolenz can neither deny nor confirm the longstanding rumor that Hendrix flipped the bird at the combative crowd during that final NYC show, though he quips, “I've never seen evidence of that rumor, but if it's true, he certainly ain’t the first person to flip off an audience.”

In retrospect, Dolenz says he “wasn't totally surprised” that the Monkees/Hendrix tour didn’t work out. “It was just night and day,” he admits of their clashing musical styles. “And we all knew, because he was fairly unknown at the time, that those thousands and thousands of kids were there to see the Monkees. Jimi knew that too.” As for whether he thinks the negative reaction Hendrix received had anything to do with racism, he insists, “No, it had to do with the fact that these fans had spent so much of their money to see the headliners. And if fans like that are really, really anxious and passionate, they'll make their feelings known.”

Despite Hendrix’s poor reception, reservations about joining the tour in the first place, and that NME shade, he and the Monkees did hit it off, getting up to all sorts of rock ‘n’ roll adventures during their week on the road. “We spent a lot of time together. We went to clubs and wandered around aimlessly, and sometimes non-aimlessly,” says Dolenz fondly. “We got along great and had a great time. We partied; we hung around in the hotel rooms jamming and just singing, having little aftershow parties. I remember once we went to the Electric Circus in New York, a very famous psychedelic place back then.

“He was a lovely man, though very different from his persona onstage. He was very quiet — I don't want to say naive, but just a real nice, real quiet guy. But then, of course, he would launch into this incredible persona onstage, which was just phenomenal. We partied, and he partied just as good as anybody else, but it wasn't like he always had to be the life of the party and always have the attention. That's probably the reason why we got along, because I’m the same way: I get fulfillment onstage, and when I'm offstage, I want to be left alone.”

Though Dolenz and the rest of the Monkees were saddened when Hendrix suddenly quit, he admits, “Frankly, I didn't feel that bad. I'd like to think that the tour gave him some sort of a little shot, some more people knowing his name. I'm sure that some of those Monkees fans went on to be Hendrix fans.” So, in the end, the Monkees — who’d often caught flak for being a “manufactured group” — were vindicated for championing Hendrix so early on. (They were also early supporters of Frank Zappa, Tim Buckley, and Harry Nilsson, who all appeared on or wrote music for The Monkees sitcom.) But, Dolenz stresses, “We didn't run around tooting our horn to the NBC press department, saying, ‘Oh look, the Monkees like Jimi Hendrix! Aren't they cool?’ … And let me make it very clear, on the record: Jimi Hendrix would have done very well without us.”