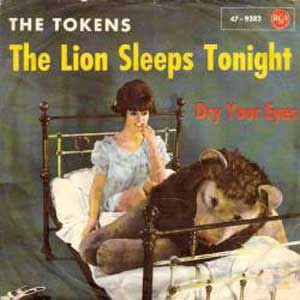 "Mbube" (Zulu for "lion") was first recorded by its writer, Solomon Linda, and his group, the Evening Birds, in 1939. Gallo Record Company paid Linda a single fee for the recording and no royalties. "Mbube" became a hit throughout South Africa and sold about 100,000 copies during the 1940s. The song became so popular that Mbube lent its name to a style of African a cappella music, though the style has since been mostly replaced by isicathamiya (a softer version).

Alan Lomax brought the song to the attention of Pete Seeger of the folk group The Weavers. It was on one of several records Lomax lent to Seeger. In November 1951 after having performed the song for at least a year in their concerts the Weavers recorded their version entitled "Wimoweh", a mishearing of the original song's chorus of 'uyimbube' (meaning "you're a lion"). Pete Seeger had made some of his own additions to the melody. The song was credited exclusively to Paul Campbell, a fictitious entity used by Howard Richmond to copyright material in the public domain.
Pete Seeger explains in one recording, "it refers to an old legend down there, [about] their last king [of the Zulus], who was known as Shaka The Lion. Legend says, Shaka The Lion didn't die when Europeans took over our country; he simply went to sleep, and he'll wake up some day." (See "Senzenina / Wimoweh" on Seeger's With Voices Together We Sing (Live).) cf. sleeping hero
It was published by Folkways, a subsidiary of Richmond/TRO. The Weavers 1952 version, arranged by Gordon Jenkins, became a top-twenty hit in the U.S., and their live 1957 recording turned it into a folk music staple. This version was covered in 1959 by The Kingston Trio.
New lyrics to the song were written by George David Weiss, Luigi Creatore, and Hugo Peretti, based very loosely upon the meaning of the original song. The Tokens' 1961 cover of this version rose to number one on the Billboard Hot 100 and still receives fairly frequent replay on many American Oldies radio stations. In the UK, an up-tempo, yodel-dominated rendering was a top-ten hit for Karl Denver and his Trio. In 1971 Robert John also recorded this version, and it reached #3 on the Billboard Hot 100 in 1972. Since then, "Wimoweh" / "The Lion Sleeps Tonight" has remained popular and frequently covered.


Pete Seeger later said in the book A Lion's Trail, "The big mistake I made was not making sure that my publisher signed a regular songwriters’ contract with Linda. My publisher simply sent Linda some money and copyrighted The Weavers’ arrangement here and sent The Weavers some money."


Seeger's publisher was The Richmond Organization (TRO), which also goes by a number of other names, including Ludlow, Cromwell, Essex, Hollis, Melody Trails, and Folkways Music Publishers. Since Solomon Linda's 1939 "Mbube" was apparently not under copyright protection, TRO founder Howard Richmond had himself claimed authorship to "Wimoweh" using a pseudonym, in this case "Paul Campbell". This was not illegal but was customary in the music business, the purpose of the pseudonym possibly being to avoid embarrassment, so that it wouldn't look like, for example, that Howie Richmond had claimed authorship for an old song like "Greensleeves" (a song he claimed author's royalties for under the name Jessie Cavanaugh). The songwriter and publisher's share of the royalties are customarily split 50-50, with the performers, song pluggers', and agents' shares usually come out of the composer's half. By claiming author's rights, TRO thus secured for itself a portion of the songwriters' royalties as well as all of the publishers' share of the song's earnings.
"Originally they were going to send the royalties to Gallo [a huge South African music publisher] ," Seeger recalled. "I said, 'Don't do that, because Linda won't get a penny.'"
Anti-apartheid activists put Seeger in touch with a Johannesburg lawyer, who set forth into the forbidden townships to find Solomon Linda. Once contact was established, Seeger sent the Zulu a $1,000 check and instructed his publisher to do the same with all future payments. He was still bragging about it fifty years later. "I never got author's royalties on 'Wimoweh'," Seeger said. "Right from '51 or '52, I understood that the money was going to Linda. I assumed they were keeping the publisher's fifty percent and sending the rest."
Unfortunately, Solomon's family maintains that the money only arrived years later, and even then, it was nothing like the full writer's share Seeger was hoping to bestow.
In 2000, South African journalist Rian Malan wrote a feature article for Rolling Stone magazine, highlighting Linda's story and estimating that the song had earned U.S. $15 million for its use in the movie The Lion King alone; this prompted the South African documentary A Lion's Trail by François Verster that documented the song's history. Screened by PBS, in September 2006, the documentary won an Emmy Award.
In July 2004, the song became the subject of a lawsuit between the family of its writer Solomon Linda represented by Dr. Owen Dean of Spoor & Fisher, and Disney. The suit claimed that Disney owed $1.6 million in royalties for the use of "The Lion Sleeps Tonight" in the film and stage production of The Lion King. Meanwhile, TRO/Folkways, publisher of The Weavers' "Wimoweh", began to pay $3,000 annually to Linda's heirs.
In February 2006, Linda's heirs reached a legal settlement for an undisclosed amount with Abilene Music, who held the worldwide rights and had licensed the song to Disney. This settlement has applied to worldwide rights, not just South Africa, since 1987.
LLR Books mywriterssite
Email ThisBlogThis!Share to TwitterShare to FacebookShare to Pinterest
John William Tuohy The Lion Sleeps Tonight
Newer Post Older Post Home