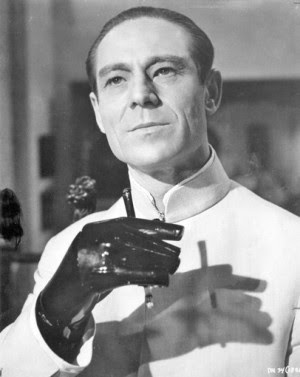 Joseph Wiseman, a stage and screen actor who played the sinister title character in "Dr. No," the 1962 film that introduced Sean Connery as James Bond, has died. He was 91.Wiseman, who had been in declining health in the last few years, died Monday at his home in Manhattan, said his daughter, Martha Graham Wiseman.
The Canadian-born Wiseman already had appeared on Broadway numerous times and in films such as "Detective Story" and "Viva Zapata!" when he was cast as the mysterious villain opposite Connery's 007.The diabolical Dr. No was a formidable foe.As Los Angeles Times movie critic Philip K. Scheuer put it: "Out pfui-ing Fu Manchu, Dr. No reveals himself to be the head of a vast underworld organization called SPECTER and dedicated to the destruction and domination of mankind. And, by gad, he has the equipment to pull it off."Wiseman hadn't an inkling that he was participating in the launch of what became one of the most successful movie franchises of all time."I had no idea it would achieve the success it did," he told The Times in 1992 with a laugh. "As far as I was concerned, I thought it might be just another grade-B Charlie Chan mystery."

Although Wiseman was part of movie history, his daughter said he viewed "Dr. No" with "great disdain.""He was horrified in later life because that's what he was remembered for," she said. "Stage acting was what he wanted to be remembered for."

Born in Montreal on May 15, 1918, Wiseman began acting in summer stock as a teenager and made his Broadway debut in 1938 playing a bit part in Robert E. Sherwood's "Abe Lincoln in Illinois."Over the years, he appeared in Broadway productions such as "Antony and Cleopatra," "Detective Story," "The Lark," "Incident at Vichy," "In the Matter of J. Robert Oppenheimer" and a revival of "The Tenth Man."Among his other film credits are "The Night They Raided Minsky's," "The Apprenticeship of Duddy Kravitz" and "The Valachi Papers."On television, Wiseman played the recurring role of crime boss Manny Weisbord on the 1980s series "Crime Story."

Over the years, he was a guest star on series such as "The Untouchables," "The Twilight Zone," "The Streets of San Francisco" and "Law & Order."In 2001, he was back on Broadway in the National Actors Theater production of "Judgment at Nuremberg," playing opposite Maximilian Schell."A life being enacted onstage is a thing of utter fascination for me," Wiseman told the New York Times. "And acting, it may begin out of vanity, but you hope that it's taken over by something else."With a laugh, he added; "I hope I've climbed over the vanity hurdle."Wiseman's second wife, dancer and choreographer Pearl Lang, died in February. In addition to his daughter from his first marriage to Nell Kinard, he is survived by his sister, Ruth Wiseman.
LLR Books mywriterssite
Email ThisBlogThis!Share to TwitterShare to FacebookShare to Pinterest
John William Tuohy Joseph Wiseman
Newer Post Older Post Home